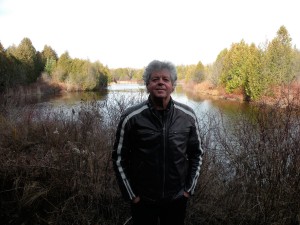 The Canadian League of Composers

Hello, and many thanks for taking the time to visit my website.

Here are some things that I am working on right now.

The Healing Heart of the First People of this Land, a full-length Symphony initially premiered by The Seattle Symphony under the direction of Gerard Schwarz, was very recently performed for the second time by the Western Symphony Orchestra at the University of Western Washington on Nov 9, 2022, under the direction of Ryan Dudenbostel. The work played to more than a thousand audience members and was live-streamed. A documentary recounting the creation of this work, titled The Healing Heart of Lushootseed, will be released in early 2023.

The Five Seasons is a full-length performance work for eight performers and nine instrumentalists. The world premiere was scheduled for three performances in The Chan Centre, Vancouver, in collaboration with the David Suzuki Foundation to celebrate its thirty-year anniversary however the pandemic caused the cancellation of the rehearsals and performances. I am working tirelessly on getting the work onto a stage.

The Five Seasons is made possible by a generous gift from Haida artist, poet, singer, and dancer, Robert Davidson, and a grant from the Music Division of the Canada Council.

The Five Seasons is a song for the planet and a call to action. The composition celebrates the Earth’s seasons, Spring, Summer, Harvest, Fall, Winter, and the human journey from birth to death. Within the parallel voyage is a call for people to oppose the environmental degradation of the Earth. The Five Seasons is a contemporary rallying cry for real change as was Rachel Carson’s ground-breaking book A Silent Spring in 1969 and Greta Thunberg’s present-day, impassioned call-to-action speeches, delivered to the world.

In the Spring of 2010, I was sitting with my granddaughter and reading to her Rachel Carson’s  A Sense Of Wonder. As I was reading this book, published in 1965, it struck me that Ms. Carson’s remarkable ability to express the beauty and the healing power of the natural world was still extremely relevant to my granddaughter and indeed all of us, in a contemporary world in which so much anxiety has been created by our rapid degradation of the natural world.  After I put the book aside, I felt compelled to build on Ms. Carson’s inspirational messages by setting out to compose The Five Seasons.

‘Those who contemplate the beauty of the earth find reserves of strength that will endure as long as life lasts… There is something infinitely healing in the repeated refrains of nature – the assurance that dawn comes after night, and spring after winter.’ (Rachel Carson-A Sense of Wonder)

The Five Seasons is a seventy-five-minute music /theatre work in five movements for eight performers (SATB) and nine musicians. The texts reach back as far as 6th Century China and forward, around the planet, to the present day.

The Plague Diaries is a new music/theatre composition funded by the Music Division of  The Canada Council. The work is inspired by Shakespeare’s isolation periods in London during the plague outbreaks and the political and social upheavals of late 1500,s in London England. Besides Shakspeare, the other characters include Kit Marlow, Ben Johnson, a Plague Doctor, a young North African woman raised in an Upper-class British family, and a North African musician who is rehearsing Titus Andronicus in the role of Aaron and is reading the first draft of Othello.

The work will illustrate the fierce conflict between Shakespeare’s desire to create artistic works with political implications and the forces of the Clergy: “The plague was caused by sin and sin is caused by plays.”

After a full year and a half of research, I have begun to write the work.

Late To The Party is a record album that singer/guitarist/composer, Ted Ritchie and I are writing.  Redwing Curl and Forevermore are on YouTube. Two more, Give Me Love and You Can’t Have Me are coming soon.

Thanks for the visit. Much appreciated.

Image and photo of The Raven screen by Gwaai Edenshaw. It is the front screen for my music theatre piece Beyond Eden. Bio photo taken by Art Lucs

Posted in Uncategorized | Comments Off on Welcome